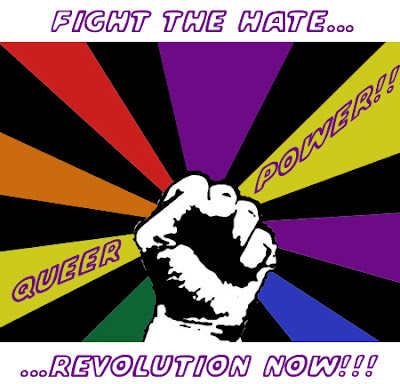 Since the vicious and animalistic attacks on three Bronx residents because they were thought to be gay by the Latin Goonies, I have remained relatively silent on this blog...but let it be known that I have been furiously working together with other Bronx leaders of the Lesbian, Gay, Bisexual and Transgender community to come up with solutions.

For far too long, we have been disregarded by our very own Bronx leaders elected to serve US the people...EVERYONE, regardless of our backgrounds.  The so-called "reverend", Senator Ruben Diaz, uses the guise of religion and the bible to declare homosexuality as a sin and an abomination but as I have said before, that same bible also says it is ok to own slaves as well as stone women.  So, "Reverend" Ruben Diaz, by using your own logic, then it should be acceptable to you if you were enslaved?

He is not the only culprit - there are others as well.  We, the LGBT are also to blame for being to quiet and have fallen into complacency.  It is time for us to rise up and let the rest of the Bronx know that we are NOT going anywhere because this is OUR HOME TOO.  The Bronx has the most number of gay families with children in the City of New York and perhaps the most in any county of the United States according the New York Times..  The Bronx is home to EVERYONE from every socio-economic background from the poorest of the poor in this country to some of the wealthiest in the country.  We are a borough of extremes and in betweens.  With so much diversity in such a small borough, we need to get along better REGARDLESS of what are views and backgrounds are. 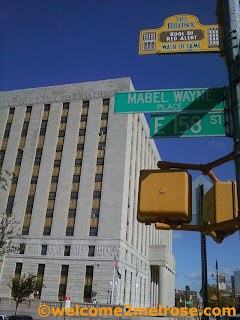 So with that said, tonight, (Tuesday, October 26th) at 6PM on the steps of the Bronx County Courthouse on the Grand Concourse and 161st Street, join us, gay, straight, HUMAN BEING as we unite to tell our Bronx politicians and our neighbors that enough is enough and we are NOT going anywhere.  Let's get along regardless of where we come from!  I will join the masses along with Reverend Carmen Hernandez, founder of the Bronx based, New York City LGBT Chamber of Commerce - the City's FIRST and ONLY LGBT chamber, spoken word artist, Rob Vassilarkis aka Simply Rob, our very own Bronx based poet and advocate of LGBT issues and substance abuse.  Check out a little bit of his story which is a great inspiration to all.  That is only but a fraction of the LGBT Community which will be there so come and join us together as one Bronx Family.

Another Melrose FIRST - Leading the City and State in Being Green!

Once again, Melrose leads the rest of the City of New York in being green.  Last Saturday at local High School Alfred E. Smith, the installation of a 1,400 square foot green roof began in what is considered to be the "...first officially approved Green Roof at a public school" according to NY1.
Read more about it and watch the video!
Congratulations again to Melrose residents for continuing to be the leaders in the Green Movement in the city and statewide!
Posted by The Mayor of Melrose at 10:30 AM No comments: 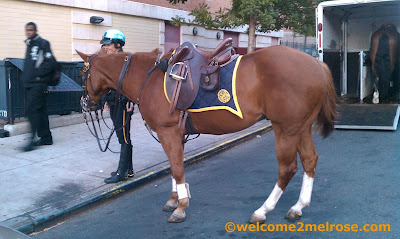 Meet Pride, one of the four horses that help cops patrol Melrose.  Pride has been "proudly" galloping the streets of Melrose for some time now and is 16 years old.  Pride and Hennessey, who is 8 years old, can usually be seen around Melrose or at other times around Arthur Avenue.  It was great to finally get to meet these two beauties up close and personal. 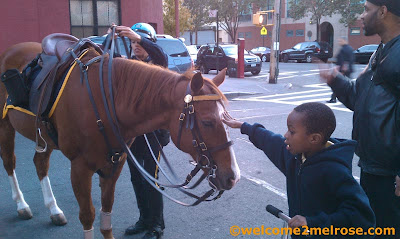 Local Melrose resident, gets up close and personal with Pride. 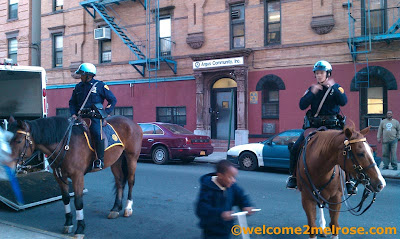 Hennessey (left) and Pride (right).
Posted by The Mayor of Melrose at 4:24 PM No comments: 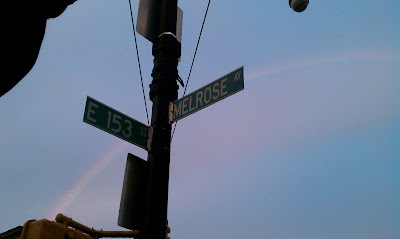 Melrose was just treated to a full rainbow...not just any rainbow but a DOUBLE rainbow! Did you see it?  Anyone else in Melrose or the Bronx see it? If so, please send in your pics to themayor@welcome2melrose.com ! 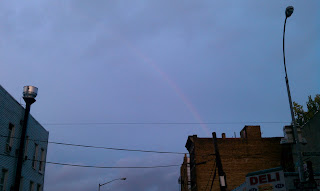 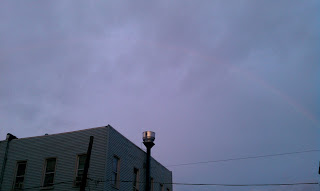 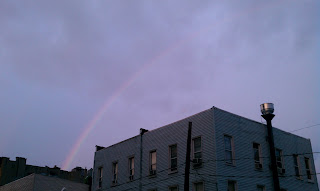 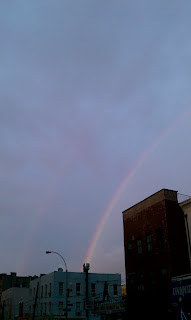 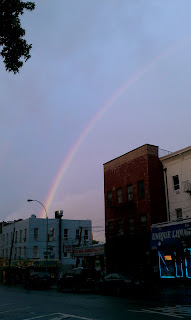 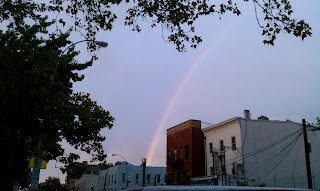 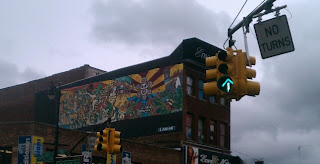 Heineken Mural at 3rd Avenue and 149th Street celebrating various aspects of Puerto Rican life and culture both here in NYC as well as back on the island.  The Taino sun is beautifully depicted  setting into the sea.
Although I appreciate that a mural was done for our people, I'm a little miffed that it had to be bastardized by the Heineken logo everywhere...time to start a new mural which mayhaps won't feature some corporate stamp all over it?

Posted by The Mayor of Melrose at 3:21 PM No comments: