Thanks go Google's blogger for hosting our blog for all this time however we have now officially made the transition over to our own site so make sure you go to:  http://www.welcome2melrose.com from now on!
Once again, we will no longer be updating this site and will be officially moving to: http://www.welcome2melrose.com effectively immediately!
Posted by The Mayor of Melrose at 8:14 AM No comments:

After 18 years abandoned and distressed, this landmark Melrose mansion has been restored and is once again occupied.   More info coming very soon on this property and its history - past, present and future plans. 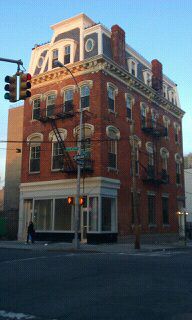 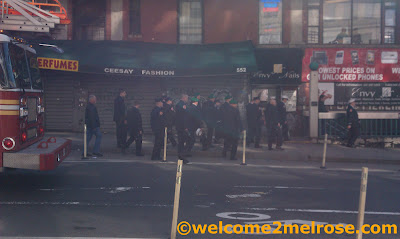 This morning we were treated to the sounds of bagpipes and a small mini processing courtesy of FDNY Division 6, Engine 71/Ladder 55 down Melrose Avenue to 149th Street as they escorted their fellow brothers who will be marching in today's St. Patrick's Day Parade in Manhattan.  Residents quickly took out their cell phones, snapping pictures with shouts of "We love you FDNY, God Bless!"
It was a truly a wonderful surprise to hear out one's windows.
A big Welcome2Melrose THANK YOU to our local FDNY Firefighters who put their lives in danger to protect us every day! 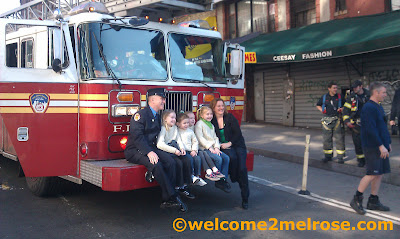 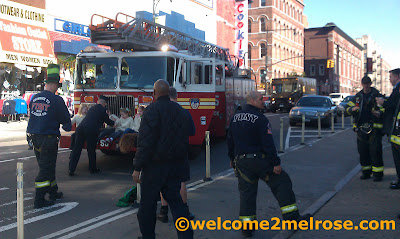 Posted by The Mayor of Melrose at 11:09 AM No comments:

A Tree of Knowledge Grows In Melrose 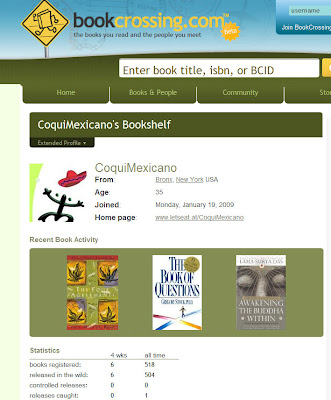 Melrose (as is the rest of the South Bronx) is a literary wasteland.  Why?  Because big name stores like Barnes and Noble, refuse to open stores in the neighborhood claiming, in not so harsh words, that we're too stupid and poor to support a store.  Yet, local residents have to either trek to Bay Plaza, Westchester or Manhattan to get their book fix on.
Enter Coqui Mexicano, the local Puerto Rican and Mexican fusion shop which is more than just an eatery but a cultural gem of Melrose.  Danisha Nazario, the coqui half of Coqui Mexicano and local resident and homeowner was frustrated at the lack of such basic services like bookstores.  Out of this frustration came a true labor of love:  A free literary project which provides residents with an opportunity to browse hundreds of books and take what they like - for free.
Coqui Mexicano is a registered member of a project called BookCrossing which is a self-described "World Library".  It is the social network of books.  You can create an account, register a book and "release" it into the wild.  Through BookCrossing you can track your donated book and its journeys, reviews, etc. (pretty much like the wheresgeorge.com project of dollar bills).
To date, Coqui Mexicano has contributed over 500 books as part of this free community library since they began in January of 2009 and in these harsh economic times, a penny earned is a penny saved.
This is what Coqui Mexicano has to say about this endeavor:

"On top of wanting to own a business for the first time, we also wanted to make a difference in the neighborhood. Reading should not be a luxury and that is why we have started a bookcrossing in our establishment. Books can be expensive and during these hard times....why should we not learn how to share with each other, learn from each other, enjoy each other, and interact with each other?

We wanted a business that offered fresh food, culture, cleanliness,music, and a spot where people from different cultures, different ethnicities, differnet walks of life, different social circumstances felt comfortable enough to come together and interact with each other with the hopes that eventually we can all see that we have more in common with each other than we have differences.

We got obsessed with the particular location we are in now. The previous owner just didn't care about anything and it showed! We felt it just dragged down the whole surrounding area which has had a bad reputation for many years with no one to prove that reputation otherwise. The area cried for VIDA and that's what we wanted to contribute to it....VIDA!

Because we are humble people of the neighborhood who are of meager means......what we can offer at our establishment at this moment is very limited.....BUT....it is clean....and it is fresh.

We hope that with your help we can get on our feet and expand to realize this dream!"

-from Coqui Mexicano's profile on BookCrossing.
So if you're in the mood for some good books, check out their collection by either going to the store (and don't forget to try their scrumptious food) or you can simply go to their profile on bookcrossings and browse the list from the comfort of your own home (sans guava cake, flan, flancocho, ricanized cous-cous or any of there dozens of tasty dishes).
Also,  before throwing out your books, please consider DONATING them to Coqui Mexicano so that they can in turn share them with those less fortunate at absolutely no cost.
Here's a big welcome2melrose THANK YOU for Coqui Mexicano's continued success in providing us with a quality establishment that gives back to our community.
Posted by The Mayor of Melrose at 1:36 PM No comments:

Dwight Hardy: A Diamond In The Rough

Not all stories that come out of the projects in Melrose are tragic ones that end in death or drug busts.
Dwight Hardy's is just that kind of story that shines like a beacon in the stormy seas of living in urban public housing in the poorest congressional district of the country.
Read more:
NYT: Dwight Hardy: From the Bronx t 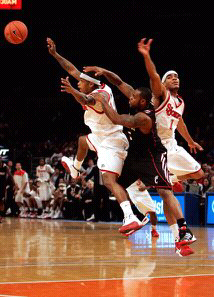 Posted by The Mayor of Melrose at 8:39 PM No comments:

A Celebration of Women Entrepreneurs in the Bronx

This coming Tuesday, March 8th please join us at PeaceLove Cafe as we celebrate Women's History Month with a panel discussion focusing on Bronx women entrepreneurs.  The panel discussion is part of a year long series of events hosted by The Bronx Entrepreneurs and Business Network, a local grassroots networking group.
See press release below for more info:

A Celebration of Women Entrepreneurs in the Bronx

The Bronx Entrepreneurs and Business Network, an independent grassroots networking group, will celebrate Women's History Month with a spotlight on women and Bronx entrepreneurs Tuesday, March 8th at the PeaceLove Cafe in Melrose. Free.

Press Release - Feb 28, 2011 - The Bronx Entrepreneurs and Business Network, an independent grassroots networking group, will celebrate Women's History Month with a spotlight on women and Bronx entrepreneurs Tuesday, March 8th at the PeaceLove Cafe in Melrose.

In these trying times with so many entrepreneurs and businesses struggling to stay in business, this event will feature a panel discussion on getting the most out of networking and referrals without having to spend a lot of money. Find out tips on choosing networking events that are best for you and your business. Learn strategies on using social media for your business effectively.

Clarisel Gonzalez, editor and publisher of PRSUN Communications, will moderate the panel.

Marcia Cameron is currently the Director of the Bronx Women’s Business Resource Center. This center seeks to empower women and minority entrepreneur by assisting them become economically independent through self-employment and is the only one located in the Bronx. Prior to joining the Women’s Center Ms. Cameron worked for both Wachovia Bank  and JPMorgan Chase Bank where she was responsible for the retention and acquisition of existing and new-targeted client segments. In both positions she earned awards and accolades from her employers.

A strong believer in giving back to her community she worked as a volunteer Literacy tutor at the New York Public Library and is  the Executive Director for the National Christian Chamber of Commerce Inc.

Ms. Cameron attended the University of Technology in Jamaica, where she earned a Degree in Electrical Engineering. She received a Bachelor of Science in Business Management from Concordia College, a private Lutheran College in Bronxville, NY.

Cheryl Sanchez is the Founder and CEO of TheNetWorks Organization and a consultant for a national radiology company. She is a graduate of Fordham University with a B.S. in Business Administration and an active member of the Fordham University Alumni Association as well as the Bronx Science Alumni Association and the Hudson Union Society. While looking for effective ways to network and market healthcare consulting services in 2005, Cheryl Sanchez learned that there was no one networking organization that could provide everything she was looking for. She subsequently established TheNetWorks (a play on words) as TheNetWorks Organization, LLC in 2006.

Roxanne Ferrance, Cake in a Cup

Cake in a Cup NY was founded in 2008 and has become one of the fastest growing cupcake and cake companies in the Bronx. The company customizes mouth-watering and decadent desserts, which are baked and delivered within 24 hours. The signature "Redds" is what really put us on the map. The business caters weddings, birthday celebrations, corporate events, baby showers and bridal showers too. Some of Cake in a Cup's past catering events included LaChanze book signing tea party for "Little Diva" and for Russell Simmons' Rush HeART Foundation luncheon.

Other highlights of the evening:

Featured artist of the night Cindy Casado aka Cindy SugaRush will perform.

Comedian CindySugaRusH has been hard at work through out New York City's premiere comedy venues. In addition to her work as an artist, Cindy is also an entrepreneur of her own pet business.

Graphic artist Nina Cochran of CodeNYC has volunteered to take on the new logo project for the Bronx Entrepreneurs and Business Network. Many of Nina's work has an urban city edge to it.

Nina's mission is to spin-off urban themes by branding a mark to cover the 5 boroughs with cutting edge marketing and representation of City Life in all Advertising, Graphics and Promotions. Bronx Entrepreneurs and Business Network members are currently voting on the group's logo from a selection of designs by Nina.

PeaceLove is a healthy food, music, Internet café. It is the first of its kind in the South Bronx. Darada David grew up in the South Bronx and decided to have her business here as a way of giving back and investing in the neighborhood. Darada believes that “healthy eating is so important for our community, for our world.” PeaceLove’s goal is to fill a lack of healthy choices. Darada promotes a “whole South Bronx Health Kick.”  At PeaceLove, patrons can relax to live Jazz while sipping on Organic Coffee/Tea and browsing the Internet. The three are inseparable. It looks like downtown uptown. Come by morning, or afternoon. Stop by Friday and Saturday evenings to hear some of the hottest live Jazz/ R&B musicians in New York or Thursday Poetry for a special treat. Visit peacelovecafe.com, PeaceLove Café- Facebook.

Partners for this event are PRSUN Communications and the PeaceLove Cafe. To RSVP, go to http://womenbiz.eventbrite.com. 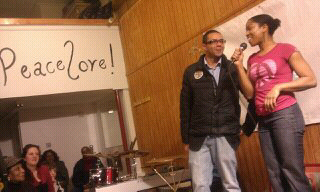