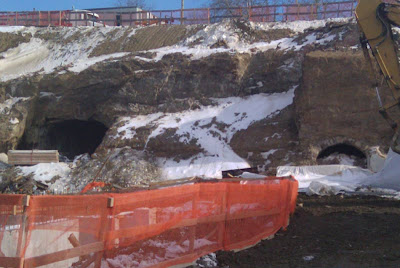 When people think of The Bronx and Melrose in particular the last thing on their mind's are the words brewery and caves.  According to local histories it seems that Melrose had its share of both as was first mentioned this past week on NY1 as reported by Dean Meminger.

On Wednesday, I had the privelage of touring the caves that once were a part of the old Ebling Brewery Co. (one of New York City's oldest breweries of the time and opened in 1868) located on St. Anns Avenue and East 156th Street where a massive 600 unit low to middle income apartment project is currently rising.  The tour was led by Site Safety Manger, Steven Hanges of Joy Construction and along for the tour was New York Times journalist, Sam Dolnick and New York Times staff photographer Ruth Fremson who "was part of the AP team that won the 1999 Pulitzer Prize for Feature Photography covering the Clinton impeachment."

Walking into the caves which were built by the Ebling Brewery Co was like walking back into time once you entered since they had been out of site for the most part of the last 70 or so years.  Few people in the neighborhood even recalled the caves since the brewery was closed for so many years.  They were used as storage for Ebling's beers where they claimed that they were aged and after the construction crew unearthed the caverns it was obvious that it was a factual claim and not just tall tale told to customers to entice them to purchase their brew.  Ebling's continued to brew their beer even during Prohibition which cost them and the 150 or so employees the ability to manufacture "near beer" for a period of 1 year costing the company $250,000 which was what it was making a year for the production of "near beer" back in 1925 when they were padlocked by the Court for "manufacturing, sale and possession of real beer."  Hupfel Brewery, another local Melrose company, chose not to enter the bootleg business like so many others and instead turned their brewery into a mushroom farm - the neighborhood is just full of surprises.

The day was quite chilly with bitter winds occasionally ripping by but upon entering the caves, the deeper we went in the warmer the air was which confirmed what Charlie Cofrancesco, assistant supervisor at Joy Construction said about the temperature being a constant 58 degrees throughout the year. One of the remaining 7 caves which had been rediscovered we could not enter through its main entrance since half of it was flooded so we had to go through the northernmost tunnel, down a hill towards the back to get to it.  At the end of this particlular section was a sealed off wall of cinder blocks which was erected to seal off the part of the tunnel which extended below Eagle Avenue and under P.S. 157 which was constructed in the 60's.

Steven Hanges jokingly said that whenever people asked if they found any artifacts he disappoints them by saying no, not a thing except a bottle of beer and an oar which was used to move the barges of kegs back and forth.  Mr. Hanges also went on to say that when they first found the caves they immediately stopped construction and called City officials in to investigate whether or not they had perhaps encountered a burial ground of sorts or remnants of local Native American tribes.  Once confirmed that that was not the case, they proceeded with construction.  The only unfortunate part of this is that for engineering purposed the caves must be filled in.  A few of them had already collapsed as construction continued along and with the exception of local media, the construction crew, city officials and myself, the caves will be gone from Melrose and a bit of old New York history will be gone.

But it doesn't entirely end there for Steven Hanges said that a landscaper out in Long Island has purchased quite a large amount of the rocks found in and around the caves so a bit of Melrose and The Bronx will now be decorating someone's landscaping around the region - the irony that a part of the South Bronx will beautify a wealthy family's front lawn when so many people still frown upon the area and do not realize the rebirth that has happened in Melrose.

So with that, my fellow readers, I leave you with some more photographs of my journey.  A big Melrose THANK YOU is in order for Steven Hanges, Joy Construction and all who made it possible to allow for a tour of the caves and record a part of our local history before they are gone forever. 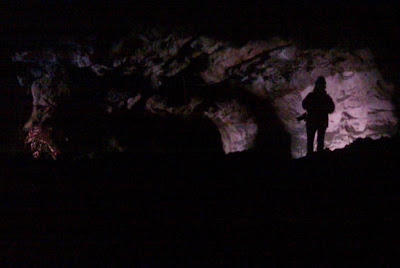 New York Times Staff Photographer Ruth Fremson looking down from the top of a hill within one of the caves. 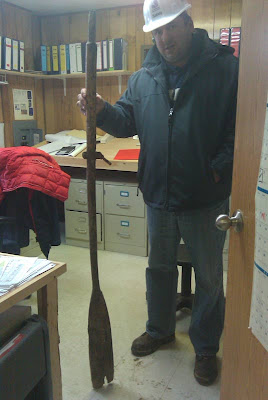 Steven Hanges holding one of two artifacts discovered in the caves - an oar. 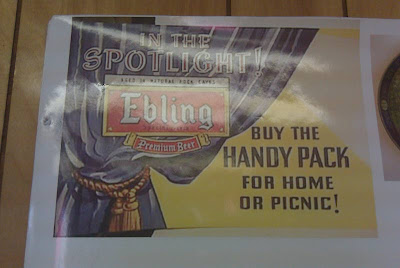 There is still debate whether or not the caves are natural.  Popular consensus

is that the caves were probably created by hammer and chisel as well as dynamite blasting. 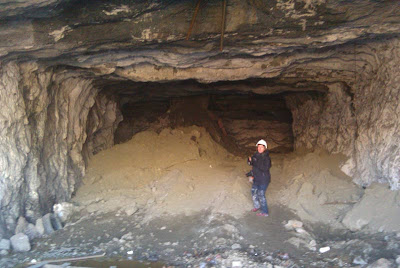 Posted by The Mayor of Melrose at 2:35 PM

This is a great story, calling up the days of brewing beer in the South Bronx. I wonder what other underground treasures might exist beneath our feet?

Hi, I am a grandson of Phoebe Ebling, who died in 2002. I am so glad to see these photos of the Ebling Beer Company's caves. I am very pleased there is a record of them.

Hello to Phoebe Ebling's grandson!
I'm flattered and very glad that you stumbled upon the pictures. Would it be possible for you to contact me? I have tons of questions that I'm hoping you may have answers to.

I live in the Brewmaster houses on Eagle ave. Unfortunately most of the block has been lost and now has newer houses, awesome to see the history of these houses since the architecture is so different even from the old houses in the neighborhood.Here's an old picture of them.
http://www.fieldtripper.com/c/zi4YcpCRb_0%3D/arcadia%2FBrewmaster%27s-row%2C-1980s

My parents owned a Bodega in the 1950's on 139th and St. Anne's Avenue. The name of the store was Bracero's Grocery. I was too little to take any pictures of it and I'm hoping to find someone who may have a one.
Thank you,
Ivonne Bracero-Raniszewski

I have a blob top Ebling Brewing Co. NY USA bottle in good condition. I am being led to believe by a bottle collector that it is not worth anything. Does anyone know what an Ebling hand dug bottle is worth?

BRIAN TRAINOR-ILIVED AT 523 E 156TH ST AS YOUNG KID WE WOULD EXPLORE THE RUINS OF EBERLINGS
DEAP INTO DIF, CAVES LEFT THE NEIGHBORHOOD IN 1954. I HAVE OFTEN THOUGHT OF THE TROUBLE WE
WOULD HAVE BEEN IN IF OUR FATHERS KNEW THERE WAS A CLOSED EBERLINGE BEER GARDEN AT THE NORTH-EAST CORNER OF 156TH AND ST ANNES