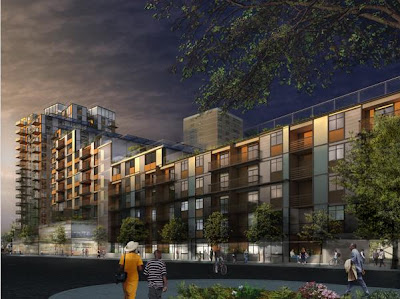 The usual brass was on hand today at the official ground breaking ceremony in Melrose for the ambitious and long awaited Via Verde (spanish for "Green Way") development. Attending the ceremony was Secretary Shawn Donovan, the 15th Secretary for Housing and Urban Development of the United States, Council Speaker, Christine Quinn, Bronx Borough President, Ruben Diaz, Jr (as well as his notorious father, State Senator, Ruben Diaz), Congressman Jose E. Serrano and of course, New York City Mayor Mike Bloomberg. The event was coordinated to coincide with HPD and HDC celebrating the financing of 100,000 affordable units - a milestone towards the 165,000 units goal.


Although there was much excitement in the crowd, not everyone was thrilled with the ground-breaking of Via Verde.  The union rats were in full force on display outside the tent where the ceremony was held with chants from the union workers of, "BLOOMBERG - DO THE RIGHT THING" over and over again, unhappy about the lack of union jobs for the project.  The chants began during Bronx Borough President, Ruben Diaz, Jr's speech to which he said, "They chose to start as I started to speak - but they have a right to have their voices heard and practice freedom of speech."


The $99 million mixed-income rental and homeownership Via Verde is an exciting "green" project developed by Phipps Houses and Jonathan Rose Companies, in partnership with Dattner Architects and Grimshaw Architects which will offer residents approximately 40,000 square feet of open space and is designed to achieve LEED Gold designation.


Some of the features that residents will come to enjoy are:

Construction is expected to be completed in 2012.  This is yet another big win for the Bronx and our great neighborhood of Melrose where we continue to lead the City and State in what it means to be GREEN! 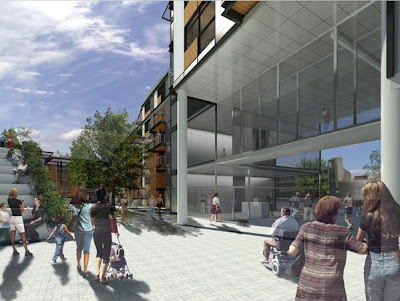 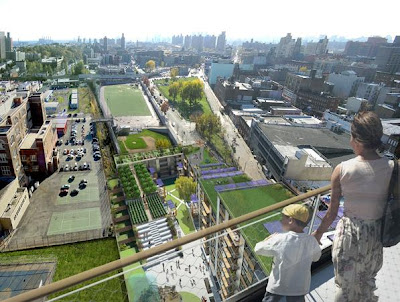 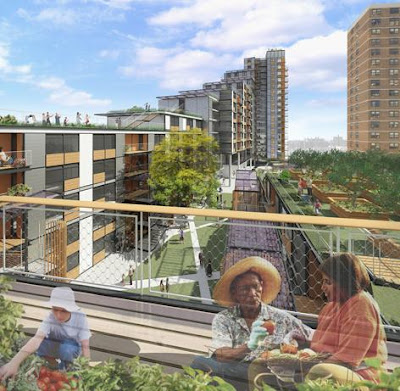 The "Mayor" of Melrose with New York City Mayor Michael Bloomberg
Posted by The Mayor of Melrose at 1:15 PM

why does that photo of you and bloomberg look so weird? is it photoshopped or something?

nope no PhotoShop. I was really there and spoke with him for a minute. His aide took my phone to take a pic but his hands were shaky. As a matter of fact, Bloomberg was asking him why were his hands shaking when the picture was taken.

Hi to the Mayor of Melrose. Great post we cross-posted your story on our site Checktheweather.net. A site where young people of color redefine green.

good job Ed, you actually had mayor-to-mayor social intercourse.
That's enviable. Trash this if you don't think it's funny.