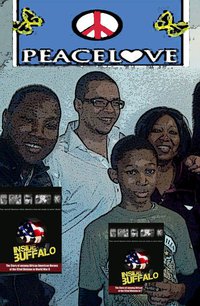 This Saturday, February 26th, join Italian filmmaker, Fred Kuwornu at PeaceLove Cafe for the free screening of 'Inside Buffalo'.  Inside Buffalo chronicles the story of the 92nd Buffalo Division, an all African-American segregated combat unit that fought in Italy during World War II.

Here's what the invite has to say:

Reconstructing for the first time an important piece of African American history and placing it within the context of Civil Rights history, the award-winning Inside Buffalo tells the story of the 92nd Buffalo Division, the all African American segregated combat unit that fought with outstanding heroism in Italy during World War II.
Called "Buffalo Soldiers," these men fought two wars at the same time: one against the Nazis, the other against racial discrimination. Those who survived found that their contributions went unnoticed upon their return to United Stated.
Director Fred Kuwornu, an Italian filmmaker of African heritage, finds little-known aspects of the story, including details of the friendships forged between African American soldiers and the Italian partisan fighters and villagers they liberated from fascist rule. It is a 2008 meeting with Spike Lee—who was shooting Miracle at St. Anna on location in Tuscany—that inspired Kuwornu to start this very personal voyage of discovery, culminating in the powerful documentary.
The last living African American soldier awarded the Medal of Honor in WWII, Vernon Baker, recounts vividly his wartime experiences and the heroism of his unit.
Film screening of the documentary and discussion with filmaker Fred Kuwornu.
Presented in collaboration with the Bronxmedia.com and PeaceLove Cafe'.
Thank to support the Legacy of the 92nd Buffalo Soldiers Division in WWII and American Vets.