The Old Bronx Courthouse - An Old Tomb is Opened... 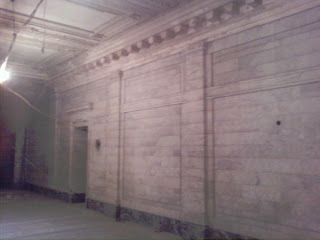 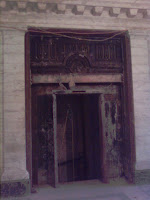 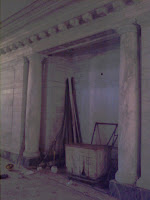 Yesterday under cloudy skies and with a chill in the air, 5 individuals from all walks of life entered the Old Bronx Courthouse.  A little after noon, Henry Weinstein, owner of the landmarked building opened the gates and we all followed him inside eager with anticipation and emotions probably not too dissimilar to an archaeologist entering an old temple for the first time or one of the great pyramids for after all the building has sat much like a sealed tomb for the past 35 years.  Immediately upon entering, the amazing architectural details come alive, the daylight dancing upon the intricate iron-worked doors and carefully detailed marble.  Mr. Weinstein then proceeded to the basement to switch on the lights and without warning we were transported to a time a little over a 100 years ago. 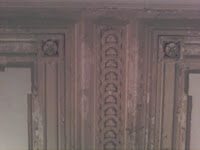 Among the five of us besides myself and Mr. Weinstein were Fred Connolly, principal of Real Estate Financing, Inc and friend of Henry Weinstein, Dr. Richard Izquierdo, MD, founder and Medical Director Emeritus of Urban  Health Plan, Inc. as well as a pillar and legend of our community and Clarisel Gonzalez, the editor and publisher of Puerto Rico Sun Communications, an independent multimedia social entrepreneurship as well as a local resident who is passionate about empowering our residents.  Last week, Mr. Connolly reached out to Dr. Izquierdo, Ms. Gonzalez and myself to begin a conversation about the future of the Old Bronx Courthouse along with Mr. Weinstein and himself.  During the tour of the landmarked building, which we scoured every inch from rooftop to the basement, Henry Weinstein walked us through some of the history of the building itself, from the old holding cells 3 levels high and the old dumbwaiter system used to feed the inmates on each of those levels to the walk-in safes in the judges' chambers. 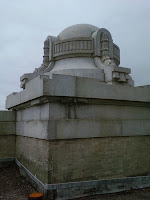 After what seemed like hours (infact was probably almost 2 hours) of walking through the old corridors and massive court rooms with soaring 25 foot ceilings and ironworked window frames which once housed stained glass we headed over to Coqui Mexicano which is located across from the Old Courthouse to continue our conversation.  One of the ideas that I am pushing for as well as many local residents is to have the building utilized as a mixed-use building much as the successful Chelsea Market is as well as luring Barnes and Noble to the building as a possible anchor tenant because everyone in The Bronx knows we are in desperate need for a book store as we only have 2 in the entire borough and none below the Cross-Bronx Expressway. 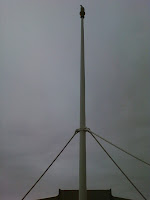 The idea of a mixed-use development works very well with the current changing demographics of Melrose which is becoming more and more solid as each day passes because multiple tenants, retail and a charter school as well as possible office space is more sustainable than having a single tenant in such a massive building.  Dr. Richard Izquierdo, or Doc as most people know him, has opened up a dialogue with Mr. Weinstein to discuss the possibility of becoming a tenant of the Old Bronx Courthouse for his Health and Science charter school which he is currently seeking to get approval to open up in The Bronx.  The charter school itself will be a legacy of Dr. Izquierdo that will be left to the community and its children and has been designed for grades 6-12 where once its students graduate, they will graduate with certificates as EMTs and even nursing techs to be able to enter the workforce immediately as well as an educational advantage to continue to higher education to pursue degrees in the health care industry.  The school will essentially cultivate local, home grown future physicians, nurses and healthcare professionals of tomorrow.  It should be noted, however, that Dr. Izquierdo's charter school is NOT the original school that was in negotiations with Mr. Weinstein.  That particular charter school after working with Henry Weinstein for over 2 years, decided to move to another location on River Avenue leaving the the Old Courthouse without a future again.  Mr. Weinstein stated yesterday that so much preliminary work has been done that the work needed to bring it back to life would take about 6-9 months in his estimation, and to his credit and 30+ years in the industry, this is a man who knows what he is talking about...it is not his first time around with such developments. 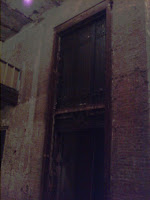 Another idea that I posed to Henry Weinstein as well as Fred Connolly is the possibility of having a small space donated as an art gallery for the local community as well as utilizing the common hallways and areas as art space to display local talent that will be curated by local artists as well.  All these ideas blended together will create a place that will unite the past with the present as well as a window on the future through the charter school and will make the building a destination for Bronx residents as well as outsiders.

The Bronx is Building as Borough President Ruben Diaz, Jr. loves to tell us at every opportunity and it is time for this gem of a landmark building to rise from the ashes and open for business once more.

A big Melrose THANK YOU goes out to Henry Weinstein for believing in The Bronx and truly loving this landmark building...so much that he has waited over 10 years to find the right fit for the building's future as well as the community, to Dr. Izquierdo, our pillar, legend and inspiration for dedicating so many of his 80 years on this earth to provide a better life for our residents as well as his vision of creating a charter school to produce local home grown future physicians and health care professionals, Fred Connolly for having the vision and believing in our vision for the Old Courthouse and getting us all together and Clarisel Gonzalez for her hard work and dedication to empowering the local community and keeping us abreast of all that's newsworthy as well as her wonderful insight yesterday to the potential future uses of the Old Courthouse. 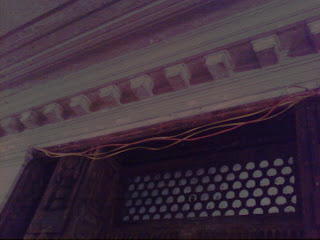 Beautiful scalloped window at the main entrance in the main hall 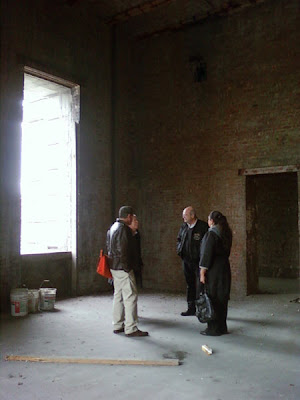 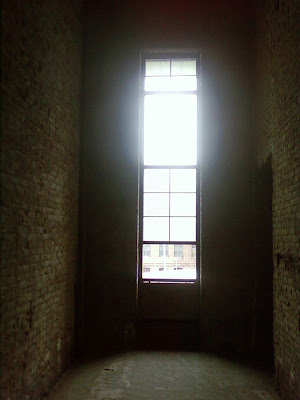 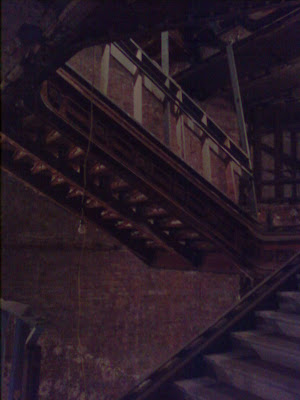 Spiral staircase that goes all the way up to the top floor.  The inner open space rose from the lobby to the 4th floor allowing for the flow of warm air during the winter months. 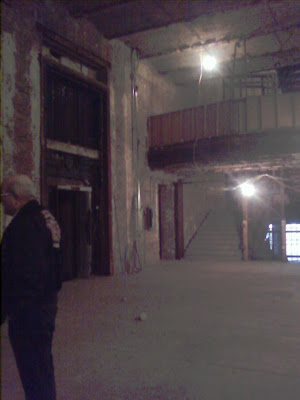 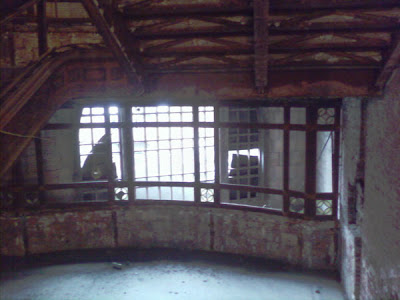 What's left of the iron-framed stained glass windows on each mezzanine landing throughout the spiral staircases. 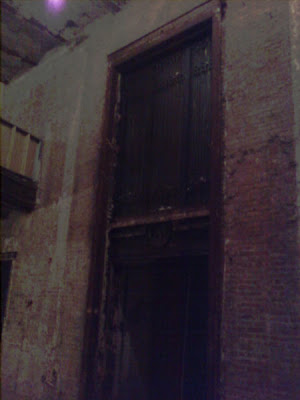 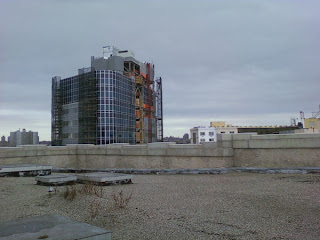 View of Boricua College from the rooftop 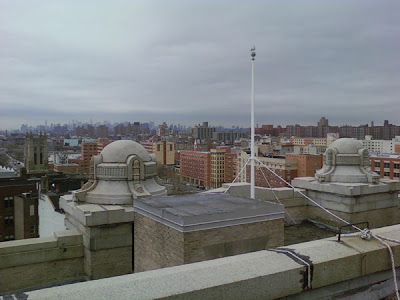 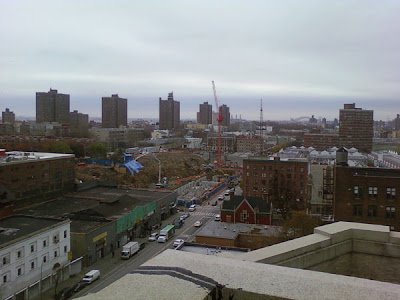 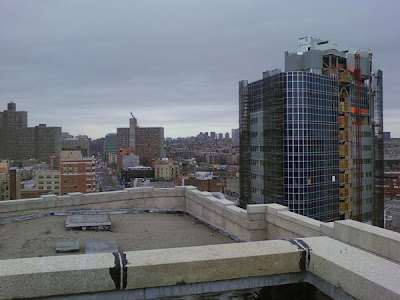 Posted by The Mayor of Melrose at 4:22 PM

I have long wondered why this building has sat vacant for so many years.
I am an employee of NYS who works in the court system. I've worked in the Bx. Criminal Court and the Bronx Supreme Court (at 851 Grand Concourse--not the so-called Hall of Justice).
This building could be put to real use. I hope Mr. Weinstein's plans go forward. It would be nice to have a sustainable business there.