Local Restaurant Shut Down By The Department of Health 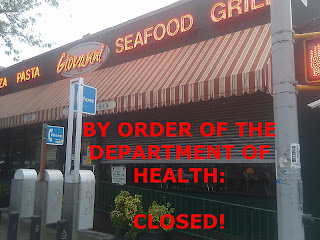 Welcome2Melrose received the tip from local Concourse resident, William C., that Giovanni's restaurant - a local favorite Italian eatery at 579 Grand Concourse and East 150th street, was shut down by the Department of Health.
A walk over to the popular bar and restaurant did indeed the show that the gates had come down and that the DOH had placed the bright yellow, "CLOSED BY THE DEPARTMENT OF HEALTH" stickers of death on two of the restaurant's entrances.  When two different individuals were asked why they were shut down, two very different answers were given.  One older gentleman did try to block me from taking a picture of the signs and he also claimed that "something" had broken in the kitchen.  Another man at the entrance on the Concourse simply stated that they were shut down because of a "gas leak".  Now we all know that Con Edison would have been on the scene not the Department of Health. 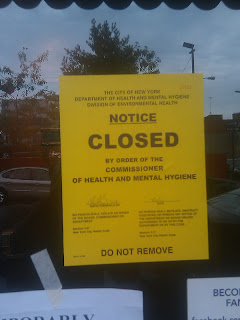 According to New York City's Department of Health website, the last inspection of Giovanni's was on 8/2/2010 and were cited for 3 violations for a total of 17 violation points.  2 of the 3 violations were considered critical and highlighted by red text which read as follows:

2) Evidence of mice or live mice present in facility's food and/or non-food areas.

Once a restaurant has been inspected by DOH and have received several critical violations, inspectors will return to see if the situation has been remedied which leaves one to wonder what else did they find upon their second visit?  Busboys and staff were scrambling inside vacuuming and cleaning up the restaurant but as I got closer to take a picture, the gates were lowered.
Comments anyone?
Posted by The Mayor of Melrose at 11:45 PM

Good to see you breaking the news in Melrose. Watch the mainstream media outlets follow you. )

Glad you were able to get your photo and story.

Actually, correction: It was not a walk over but a DRIVE over...by none other than fellow blogger Clarisel Gonzalez editor and publisher, Puerto Rico Sun Communications
www.prsun.blogspot.com

Thanks for the ride, Clarisel!

Their customer service stinks! Asi que no me sorprende if they can't keep their establishment in tip top shape. I prefer Yolanda's over on 149th.

Ed--thanks for posting this. Any idea how many days they were closed? Seems like two at least and possibly over the weekend but I know they are back open. While Giovanni's is convenient yet with Manhattan prices I would consider eating elsewhere like Sam's Soul Food (great drink prices) or Yolandas or La Perla's for Mexican. Giovanni's staff is so-so and the food has been "very okay" for the seven years I have been eating there. The staff is not well trained or very friendly. Take your dollars elsewhere....

Proper sanitary is very important in a restaurant because the business is primarily catering food to people. We don’t want to eat contaminated food.

My best friend’s family restaurant runs for years because of the food are great, the place is clean and most especially local internet marketing company boosts the image of the restaurant to the fullest. Their business ranks high on local search, marketing services do really have strong positive effects when it comes to small local business.