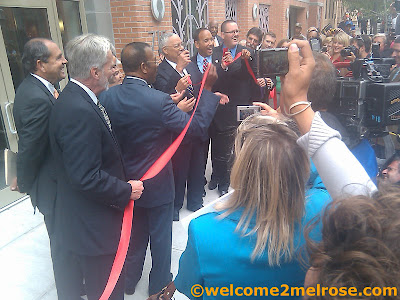 On Thursday, September 9th, General Colin Powell attended the ribbon cutting ceremony for the new low-income cooperative apartments in Longwood bearing his name - The General Colin Powell Apartments.  It was a proud day for Bronxites as we listened to him speak proudly of his Bronx years. 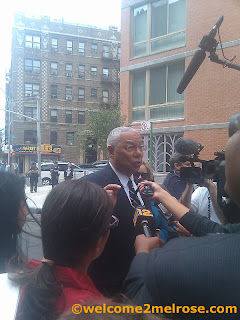 General Colin Powell, born in Harlem and raised on Fox Street in the Longwood neighborhood of the Bronx, entertained the crowd with stories of growing up in the South Bronx and the diversity of his neighborhood from the Puerto Rican bodega owners, the Jewish shopkeepers as well as West Indian and African-Americans all getting along in one neighborhood.  He spoke of how in Europe in particular, people are most fascinated with the first chapter of his book  "My American Journey

", which dealt about the years he lived in the Bronx. General Powell even mentioned that before the advent of the Internet there was the "AuntNet" - the network of his aunts as well as local mothers who always looked out the apartment windows to look after the kids.  He quipped that "...nothing traveled faster than information on the "AuntNet" when you got into trouble." 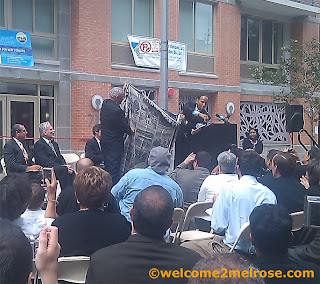 The General Colin Apartments (originally called the Fox-Legget Cooperative Apartments), located at 715 Fox Street, is a 50 unit cooperative project built with "sweat equity" as 12 of the 50 units were constructed by the unit's owners themselves in conjunction with Habitat for Humanity.  It is also a platinum LEED certified green building in the tradition of the continued greening of the Bronx by developer Les Bluestone of BlueSea Development.  As you may recall, Mr. Bluestone is the man behind the beautiful Eltona in Melrose which is also LEED certified as well as dozens of green townhomes in Melrose. 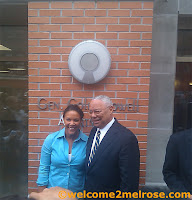 According to the press release issued by New York City Department of Housing Preservation and Development some of the features of this project are:

Let's hope that the Bronx continues to lead the rest of New York State as the forefront of green housing and green initiatives!  Don't believe that statement? Well did you know that Melrose is the ONLY Silver LEED Certified neighborhood in the ENTIRE State of New York?
A big Melrose THANK YOU to all who made these affordable possible, especially to BlueSea Development for their continued leadership in providing not only affordable housing, but QUALITY housing which we can all be proud of. 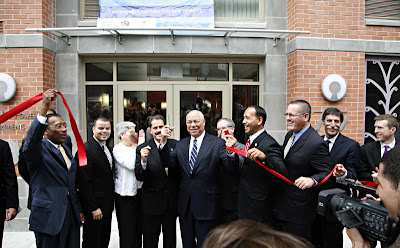 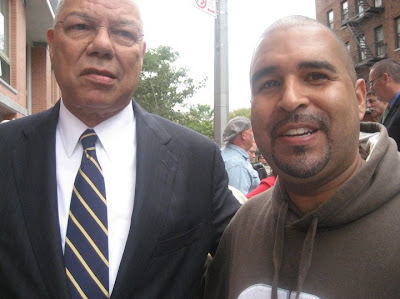 General Colin Powell and The "Mayor" of Melrose
Photo Courtesy of BronxVibe
Posted by The Mayor of Melrose at 8:56 PM

twisted world we line in when a war criminal can be so honored and no mention made of his role in the iraq war with his lies at the UN or his murders in Vietnam and cover up of the My Lai massacre.

A great tribute to one who has given outstanding selfless service to the nation. The complex will serve as a living reminder to our youth, whatever their circumstances, that success is achievable through hard work, caring about self and others and the constant strive to develop solid values and character as General Powell's life story so ably demonstrates.