Welcome2Melrose On The Recent Anti-Gay Attacks in The Bronx 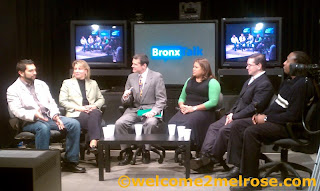 As you already know, Welcome2Melrose has joined forces with other Bronx Lesbian, Gay, Bisexual and Transgendered (LGBT) leaders to discuss as well as come up with solid solutions to the events of early last month in October where 3 individuals, suspected of being gay, were held captive and tortured. 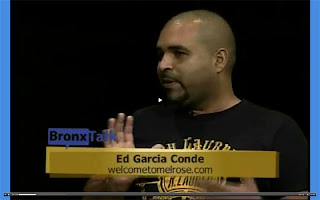 On Monday night, I received a call from Gary Axelbank of BronxTalk, the longest running weekly talk show in New York City, so that I can come on the special one-hour show dedicated to the same issue and speak about being gay in the Bronx. Some of the show's guests were, Dirk McCall, Executive Director of Bronx Community Pride Center, the Bronx' main and only LGBT Center, Diane T. Ort, M.S., Deputy Chairperson, School of Criminal Justice at Monroe College and City Council Member, Annabel Palma of the 18th District in the Bronx.  The show is a must watch as it brought together community leaders from different segments of society to discuss the conditions that may have led to the attacks as well as what we can do to prevent this from happening again - not just anti-gay attacks but anti-HATE attacks period.
Also, about a week ago, several Bronx LGBT leaders, including myself, congregated at PeaceLove Cafe to speak to the Mott Haven Herald on the same topic as well.  Check out, yet, another informative piece on LGBT issues of the Bronx.
A big Welcome2Melrose THANK YOU is in order for Gary Axelbank and everyone at BronxTalk for putting together a wonderful show and a wonderful panel of guests on such a serious and important topic.  The Bronx LGBT Community needs all the support we can get as well as outlets to let our voices be heard and what a better place than on BronxTalk.
Posted by The Mayor of Melrose at 1:29 PM